Increasing Uptake: Southeast Asia on the verge of an EV surge

The interest in electric vehicles (EVs) in the Association of Southeast Asian Nations (ASEAN) has increased over the years. According to the ASEAN Automotive Federation, the total number of vehicle sales in ASEAN member states stood at 2.45 million in 2020. This number is expected to increase with population growth and economic development. EV uptake is also expected to be fuelled by growing pollution concerns and the need to switch to cleaner and environment-friendly modes of transport. Emerging EV technology could bring about improvements in energy efficiency as well as in the environment and health of human beings.

Southeast Asia Infrastructure provides a snapshot of the key factors favouring EV growth, current EV adoption, key factors to be taken into consideration, and the EV outlook in the ASEAN region…

Electrification of transportation, or e-mobility, has gained interest in the ASEAN countries, due to a number of factors. Traffic in the ASEAN countries has become synonymous with congestion and smog. This has provided an impetus to major cities in the region to adopt green and sustainable strategies, including the adoption of EVs. Further, with  consumers becoming more environment conscious, the demand for EVs has increased.

In view of the growing focus on mitigating climate risks and achieving the Paris Agreement goals for 2050, countries have started realising the importance of decarbonising the transportation sector, with EVs being one of the ways to achieve this. The ASEAN region has been able to develop a favourable policy environment to provide the right push for the adoption of EVs.

According to a report by the International Renewable Energy Association, by 2025, around 20 per cent of all vehicles on road in Southeast Asia will be of the electric variety, including 59 million two- and three-wheelers and 8.9 million four-wheel vehicles. There is room for more growth since the Southeast Asian region has a population of around 661 million.

Within the region, the benefits of electrification are wide-ranging. In addition to enabling the economies to meet their climate change commitments, reduce air pollution levels and increase energy security, electrification also offers many prospects to the already established automotive manufacturing hubs. Accordingly, existing automotive hubs in countries like Thailand and Indonesia have the opportunity to extend their footprint in the EV market and battery production. Besides, countries with relatively less developed automotive manufacturing markets can follow in the footsteps of the already established players or even leapfrog to grab a share in the EV market pie.

A number of ASEAN countries have taken/started taking steps to increase the adoption of EVs. The Brunei Darussalam National Council on Climate Change launched the Brunei Darussalam National Climate Change Policy (BNCCP) in July 2020, the country’s first climate change policy. To pave Brunei Darussalam’s low carbon and climate-resilient pathway for a sustainable nation, the BNCCP focuses on 10 core areas, with EV adoption being one of them. Further, the country aims to increase the share of EVs in total vehicle sales to 60 per cent in the coming years.

To take advantage of its already existing automobile hub, Indonesia has chalked out plans to become a manufacturing hub of EVs by 2025. The country is aiming to export 200,000 electric cars by 2025 – which is nearly 20 per cent of the overall annual car exports of the country. Indonesia sold nearly 15,500 units of electric two-wheeler motorcycles and about 24 electric passenger vehicles in 2019 (as compared to only one unit sold in 2018). Besides, it has nearly 20 charging stations held by the state-owned PT Perusahaan Listrik Negara, which holds a monopoly in the charging infrastructure segment in the country.

Malaysia has so far recorded very slow progress in the adoption of EVs. It recorded sales of 32 EVs in 2019, up from two in 2018. One of the key reasons for the highly restricted growth in the sector is the lack of a coherent policy framework in the country. The country’s original equipment manufacturers (OEMs) have managed to push the government to re-examine its EV policy. Among the initiatives being considered is the plan to develop 1,000 direct current (DC) rapid charging stations by 2025. It also has plans to develop connected aspects such as e-payment, battery management systems and charger locators, as well as service centre networks for the charging ecosystem.

Singapore plans to phase out internal combustion engine (ICE) vehicles and have all vehicles run on cleaner energy by 2040. In its 2021 budget, the government has also announced that it planned to extend more incentives to increase EV adoption. Accordingly, Singapore will develop 60,000 charging points by 2030 (from 1,700 points at present) at public car parks and private premises. Besides, the government has also decided to stop issuing licences to diesel-powered cars and taxis from 2025, five years ahead of its initial plan of 2030.

Thailand is one of the leading EV markets in Southeast Asia. As of 2020, the country recorded about 2,854 EV registrations, of which about 1,572 were new cars, an increase of 380 per cent from its 2018 level. In addition to this, the number of hybrid and plug-in hybrid EVs in the country reached a record high of 153,184. Going forward, Thailand has chalked out a road map to manufacture about 1.2 million EVs and establish 690 charging stations by 2036.

The use of EVs in the Philippines has been limited and is dominated by e-tricycles. However, the proportion of other EVs, including e-motorcycles, e-jeepneys and e-utility vehicles has increased over the years. As of 2018, the Philippines had about 7,000 registered EVs for local use.  According to the Electric Vehicle Association of the Philippines (EVAP), the country’s EV market is expected to grow at the rate of 8-12 per cent to touch sales of 200,000 vehicles by 2024. The Philippines’ EV market has about 54 manufacturers/importers,11 parts manufacturers, 18 dealers/traders and nearly 19 charging stations.

Just like the Philippines, Vietnam also offers a promising EV market, particularly in the motorbike segment. The country has an expanding middle-class population and more than 96 million motorbike riders, presenting a ready opportunity for EV manufacturers. 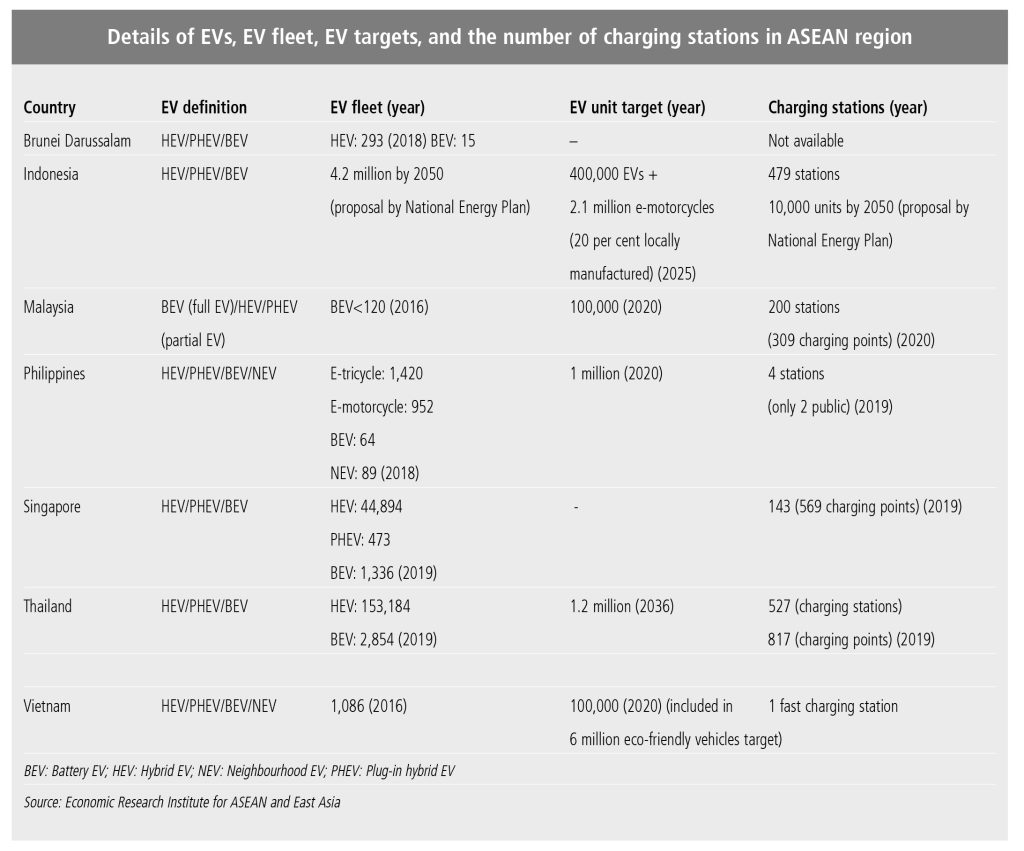 Despite a plethora of factors favouring the uptake of EVs in the ASEAN region, there remain a number of factors that need to be deliberated upon in tackling the barriers to the adoption of EVs. First, while EVs might cut oil consumption and related emissions, they will also increase the need for carbon-intensive electricity. Hence, in order to fully realise the environmental benefits of EVs, utility providers will have to augment the share of renewable energy before massive EV adoption.

Second, designing appropriate EV policies to improve the adoption of EVs is required. In view of China’s success in breaking the consensus about high costs of EVs (China has been successful in launching low-cost EVs), many Southeast Asian governments have announced their plans to accelerate electrification in their respective vehicle markets. As part of its 3030 EV Production Policy, the Government of Thailand has set a target for EVs to reach 30 per cent of total domestic vehicle production by 2030. Similarly, the Indonesian government also intends to integrate the EV battery industry from mining to lithium-ion battery production using its abundant nickel reserves. In Malaysia, the Malaysia Automotive Robotics and IoT Institute and the Malay Vehicle Importers and Traders Association of Malaysia signed an MoU to develop EV infrastructure in the country.

Another crucial factor to create demand for EVs is the availability of charging infrastructure, the shortage of which becomes a major roadblock in the transition to EVs. Many countries have started taking the requisite steps in this direction. For example, by end 2018, Energy Absolute, a Thai company, had established 1,000 EV charging stations. Similarly, in Indonesia, state-owned utility PT Perusahaan Listrik Negara has developed up to 200 charging stations in 10 cities. While progress has been registered with respect to the creation of charging infrastructure, the small number of charging stations is still a far cry from a proper public-scale utility large enough to incentivise private sector participation.

Everything is falling in place to make ASEAN countries one of the ripest markets for EVs; however, there are still a number of local hurdles that have to be overcome. While timely intervention by the government is critical to increase the adoption of EVs in the region, high tax rates on EVs, lack of charging infrastructure within convenient proximity and the limited driving range of vehicles are major factors weighing down the outlook for EV adoption. The region may require stricter policies like London’s ultra-low emission zone, which charges inefficient vehicles an entry fee to access the city of London.

Another impediment to increased EV adoption in the region is the relatively cheap prices of petrol. Hence, the infrastructure for battery recharging stations remains critical for augmenting the number of EVs in the region and convincing people to switch to EVs. Lastly, despite the establishment of home-grown OEMs, and the subsequent increased interest in EVs, ASEAN’s GDP per capita is still low and the current market remains small.

In a nutshell, while the pace of adoption of EVs in the ASEAN region has been relatively slow, it cannot be called subdued. The region appears quite promising in pockets, with Thailand, Singapore, the Philippines and Indonesia showing momentum. Regulatory changes introduced by ASEAN member states as well as the tax incentives and subsidies for manufacturers and consumers bode well for increased adoption of EVs in the region.